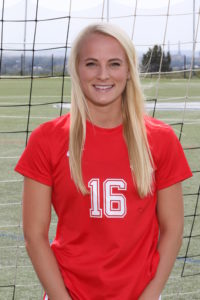 The Colorado State University-Pueblo Thunderwolves welcome a veteran midfielder to bolster their already robust roster. Mackenzie Bean brings a wealth of soccer experience to the team for the upcoming season.

“Playing on so many different teams has broadened my knowledge and experience of the game,” she said.

She is no stranger to winning. At Portland State University, she helped her team break the Big Sky winning record after winning 14 matches in a row. As a former captain of the Olympic Soccer Association, a semi-pro team in Seattle, she has seen it all. She won the 2012 and 2013 Pleasanton Rage tournament with the club.

Former coach, Paul Regrutto, pursued her for the team but she was already playing in Hawaii. After her season was finished in Oahu, she decided to come to Colorado.

“I absolutely love the team and the coaching staff and am really excited to play this season as a Thunder Wolf,” she said.

Bean enjoys snowboarding and hiking in her free time. She is a personal trainer and she uses her Instagram to teach people about fitness and nutrition.