Students enjoy activities at “Late Night at the Rec.” | Photo by Daniel Potter

Colorado State University-Pueblo hosted its second annual “Late Night at the Rec” event March 13. The late night festivities lasted from 9 p.m. to midnight and allowed participants to compete in various tournaments, games and other activities.

“Late Night at the Rec” was created in the spring of last year by recreation center employees and the CSU-Pueblo Seeking Ourselves to Unite Leaders program. Essentially, the event was centered on the idea of giving students a safe, controlled environment in which they can have fun and interact with other students.

“We were at the rec center getting a lot of emails from students at CSU-P wondering why the rec center wasn’t open at later hours,” said recreation center employee Jarred Radebaugh.

Students were also “asking if we could host special tournaments and games on the weekends at later hours for the kids who necessarily didn’t want to go out and drink or party,” he said.

“We decided to partner up with SOUL because they’re a group that’s all about organized fun in a safe environment and we just started bouncing ideas off each other. We didn’t want to do something real lazy, we wanted this to be something that students wanted to go to instead of go out and party or go out and drink.” Radebaugh said.

The event was completely free for the university. Everything from the prizes and food to entertainment was taken care of by local businesses and sponsorships from different workplaces in the community.

Students went to different stations set up around the rec center to compete in various challenges, including ping pong, Mario Kart tournaments, dodge ball, twister, three point contests and many others.

Students earned a raffle ticket after participating in activities at each station. The tickets were entered in a drawing at the end of the night for prizes. 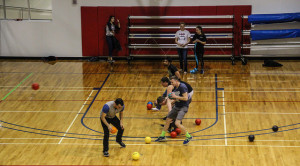 Students have been supportive of the event since its inception last year.

“I think it’s a fun alternative to partying because it gives you a chance to get together with your friends all at one location and compete in different activities while enjoying yourself just as much, if not more than, if you were at party,” said senior Tanner Hall.

Many students, like Hall, liked the idea of the late night event as it provides a safe alternative to house parties.

Radebaugh said the plan could be to expand the frequency of events like these, since they have been so successful. Instead of just once a year in the spring semester, “Late Night at the Rec” could be in both semesters or once a month, he said.

“It has plenty of room to grow,” Radebaugh said.

Junior Missy Braun said she enjoyed the event and would love to see it implemented more frequently throughout the school year.

“I think it’d be a great idea. A lot of people went and enjoyed it. I think it’d be beneficial to everyone involved,” Braun said. “We meet more people, we don’t party, we stay safe and it’s a good time.”