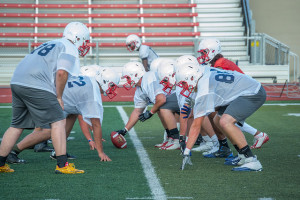 The ThunderWolves prepare for the upcoming season at their first practice Aug. 13. Photo by Dustin Cox.

The Colorado State University-Pueblo ThunderWolves will start their season in a game against Central Washington Sept. 5 at 5 p.m.

The Pack will be returning 16 starters from the 2014 NCAA Division II National Championship team, which includes six on a defensive unit that finished first in NCAA Division II in scoring defense.

CSU-Pueblo’s leading tackler is back for the 2015 season. Senior inside linebacker Joe Rosenbrock will again help to lead the defense after he totaled 107 tackles, 61 of them solo, last year as a junior.

Another returning player to watch this season is senior running back Cameron McDondle, who set a ThunderWolves single season record with 2,014 rushing yards to finish third nationally in 2014.

The Pack is also returning three of the four top receivers this year. Kieren Duncan, who is the Rocky Mountain Athletic Conference Preseason All-RMAC selection and led the team in reception yards last season, will guide the receivers this season.

Coming into Saturday’s game, the Central Washington Wildcats are coming off of a 7-4 record under second year head coach Ian Shoemaker.  The Wildcats tied for second in the Great Northwest Athletic Conference with a 4-2 mark and were pegged to finish third in the GNAC Preseason Coach’s Poll.

Central Washington has welcomed back their top quarterback, running back, and two of the top three receivers from last season. The junior quarterback Jake Nelson threw for 2,702 yards and 23 touchdowns with 13 interceptions last season.

Since 2011, the Pack has won 48 games and is well known for home victories with 22 consecutive wins. CSU-Pueblo has won each of its season openers and all seven home openers since the program returned to the school in 2008.

Following the fall camp, the ThunderWolves have named Malcolm Ruben as the starting quarterback for the home opener.

The game will be broadcast on the channel Altitude 2 nationally.