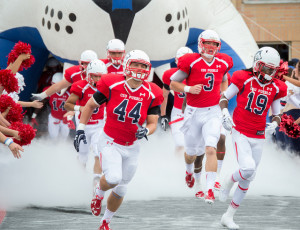 The ThunderWolves prepare for their season opener last week against Central Washington. They won 41-14. | Photo by Dustin Cox

The CSU-Pueblo football team started its 2015 season right where it left off in 2014 by dominating the line of scrimmage, creating turnovers and winning special teams. On Sept. 12, the Pack will meet West Texas A&M in Texas to try and prove its ground game.

On Sept. 5, the Pack defeated Central Washington 41-14, a score that was sparked by a 24-point second quarter. The ThunderWolves totaled three sacks while allowing just one against starting quarterback Malcolm Ruben.

In the last few years the Pack has met the Western Texas Buffaloes four times. Their first meeting was in 2011 in Canyon, Texas with a 26-24 victory. Most recently the Pack went up against the Buffaloes at home last season with a dominating 35-6 win.

This week the Pack continued to be ranked as No. 2 in both the American Football Coaches Association and D2Football.com polls. They also topped the David Boyce Football Power Ranking with the No. 1 spot.

Since 2011, the ThunderWolves have won 49 games and have recorded four losses during regular season play.

This game against West Texas will be a game to see where both teams excel and where some work needs to happen. CSU-Pueblo will find out where they stack up among the other teams in the Rocky Mountain Athletic Conference.

The Buffaloes held a 21-0 lead all the way to about six minutes remaining in the first quarter against No. 19 Azusa Pacific last week. Both teams recorded field goals in the third quarter, but two 75-plus yard touchdown drives by APU would push them past the Buffaloes brought it to 27-24.

West Texas was pegged to finish fifth in the Lone Star Conference Preseason Coaches’ Poll. The Buffaloes Head Coach Mike Nesbitt began his third season as the leader of the West Texas A&M football team and is 19-9 in his career.

The Pack is traveling to Canyon, Texas to take on the Buffaloes this Saturday. The game will be available online for fans to watch and live stats will also be available. Fans can get all of the viewing info at www.gothunderwolves.com.