Opinion: ThunderWolves season to be more of the same 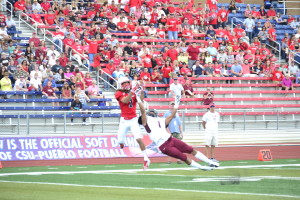 Kieren Duncan receives a first down pass early in Saturday’s game from quarterback Malcolm Ruben. The ThunderWolves won 41-14 in their season opener against Central Washington. | Photo by Dustin Cox

In the world of college football, very few phrases can be less inspiring to preview an upcoming season than the colloquial, “more of the same.”

Unless of course the aforementioned “same” happens to have won you the Division II National Championship in the previous year.

It is a distinct possibility that many students and fans who attended the CSU-Pueblo vs. Central Washington football game on Saturday experienced an intense feeling of deja vu.

A tall and agile quarterback who can get outside of the pocket and isn’t afraid to throw the ball downfield? Check.

An explosive and dominant run game, capable of surpassing well over 100 yards on the ground? Check.

A stingy and aggressive defense that creates turnovers and turns them into scoring opportunities? Double check.

Although many of the faces have changed from the 2014 roster, for the CSU-Pueblo ThunderWolves and Head Coach John Wristen, the formula is undoubtedly the same: play tough defense, establish the running game on offense, compliment it with the passing game and win.

With tremendous expectations following the university’s first national championship, the Pack did not disappoint.

Ranked second in the preseason RMAC coach’s poll, the defending champs entered Saturday’s game as if they had something to prove.

And prove it they did, in a dominant 41-14 season opener against the Central Washington University Wildcats.

Led by senior running back Cameron McDondle, CSU-Pueblo scored early and often against CWU, putting up the contest’s first points on a 1-yard McDondle rushing touchdown with 11:43 remaining in the first quarter. With the one exception of a 34-yard touchdown pass by CWU senior quarterback Jake Nelson to tie the game at 7, the night belonged to the Pack.

McDondle, who set a single season rushing record for the Pack in 2014 with 2,014 yards, looked in midseason form as he rushed for 176 yards, many of which came after first contact. He also contributed a team high three rushing touchdowns.

Cameron’s brother, Bernard McDondle, had 159 all purpose yards, 129 on the ground, bringing the Pack’s single game rushing total to an impressive 298 yards, with a team average of 6.8 yards per carry.

Senior quarterback Malcolm Ruben, who started his first game at QB for the pack, went 7-for-14 for 113 yards, with one interception and a touchdown. Eighty of those yards came on two passes to senior wide-out Kieren Duncan who finished the day with 80 yards receiving, including a 34-yard TD.

It was business as usual for the CSU-Pueblo defense, led by senior defensive end Morgan Fox. They dominated the line of scrimmage, as well as the turnover margin, totaling 3 sacks, with 4 turnovers that led to 17 CSU-Pueblo points.

Throw into the mix the blocked punt by linebacker Samuel Singleton in the second quarter, returned by defensive back Zach Young for a touchdown, and it’s easy to see how the overall margin of victory was so lopsided in favor of the Pack.

The Pack’s victory over CWU has students and fans as excited as ever for CSU-Pueblo football, and although one game cannot be considered indicative of how an entire season will play out, one thing is for sure: we’re all just hoping for more of the same.