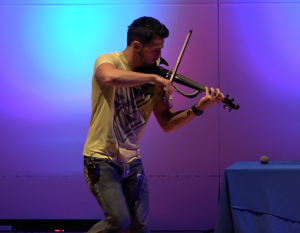 Hip-hop violinist SVET paid a visit to CSU-Pueblo Nov. 4 to perform at Hoag Hall in front of the campus and community. SVET, who was featured on season seven of America’s Got talent, covers various pop songs while remixing them with his violin.

SVET, 31, was born in Bulgaria, and moved to the United States with his parents at a young age. He was a classically trained violinist, but quickly changed his tune as soon as he discovered the fascinating world of hip-hop. Combining his classical skills with hip-hop, he creates his own unique sound.

During the event on Tuesday he played various popular songs, and showed the audience a preview of a song that hasn’t been released yet, a violin cover of the popular song “Here” by Alessia Cara.

“I think he did really well, I had no expectations coming into the event tonight, it was very unexpected. He really surprised me with lots of cool music,” said Tim Ballard, a senior studying biochemistry.

SVET also performed covers of popular Michael Jackson songs such as “Beat it” and “Bille Jean.” He talked to crowd between songs to ask them what they thought of the show in an effort to engage the audience. After the show, he signed autographs and met with fans.

Around a 60 students attended the event, as well about 30 community members.

Most of the people who attended the event said they had never heard SVET’s style of music before. “I was so amazed. It was such an amazing concept to mix hip-hop with violin. It was awesome,” said Angelina Perez, Hassan School of Business Dean Assistant.

Throughout his career, the hip-hop violinist has performed alongside many well-know artists, including Chris Brown and Kanye West. He has also played at many music festivals and concerts, and recently got back from preforming in Dubai.

SVET’s performance was part of the Distinguished Speakers Series program, which is hosted by the Student Engagement and Leadership office. The series features many well-known speakers, comedians and performers.

After the event SVET, told the SEAL office that he will be heading to perform in Miami to continue his most recent tour.