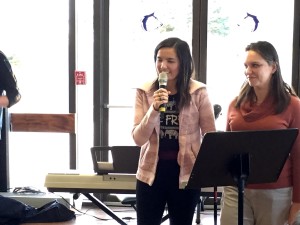 The popular campus event Tuesday Tunes hosted performer Doe Renée Nov. 17 in the Pack Café. Renée performed a unique style of music and incorporated a song she wrote as a tribute for Paris.

Renée is a second year graduate student at CSU-Pueblo. She is studying industrial systems engineering and works as a graduate teaching assistant on campus.

After getting her undergraduate degree in mechanical engineering from the University of Colorado-Colorado Springs, Renée began to work in an office setting, where she was able to learn more about the railroad industry.

But after being in the office for nine hours a day, she realized that setting wasn’t for her. “I really missed education, and I wanted that vibrant atmosphere so I left the office,” Renée said.

Renée got into graduate school at CSU-Pueblo shortly after leaving her job.

“It was awesome because it turned out there was a extra position open for a graduate teaching assistantship, so it’s interesting how the universe works,” Renée said.

During her time working for her engineering job, she found that music was a solace for her in that time. “Now I feel like I can really express myself in this more vibrant educational atmosphere, and I hope to be a professor one day as well,” she said.

Renée said people always ask her what her genre of music is, and she tells them it’s pretty much a mix of everything. But if she really had to choose a few words to describe her music they would be local, acapella and soul.

When she performed on Tuesday, Renée added poems into her songs for the audience to hear. During the performance, Renée said she saw big groups of people walking in, and decided that she should stop the current song she was playing so she could share a poem with them.

“I wanted to just go with the flow and not be constricted with exactly what I had on my plan.”

“That’s a big part of what my genre of music is: going with what your soul tells you to do,” Renée said. And that’s exactly what she did during her performance.

She would incorporate her written poems into her songs, and she even wrote and song and poem for a tribute for Paris because of the recent attacks that happened there.

“I felt like the times people were listening the most was when I was doing my rap poetry,” she said. 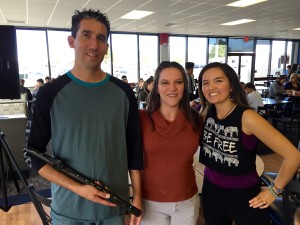 Renée also wanted the women in the audience to see her using powerful and forceful words in her poems and music, so they could see a woman speak powerfully in hopes empower them to do so as well.

“It was definitely something I had to learn how to do,” she said of powerful speaking.

Renée said it’s a huge challenge for women at this time to speak powerfully, and she wants to do everything she can to empower them to be everything they can be. She tries to convey this message in her poetry by using those powerful and forceful words.

“After being the only girl for years in engineering classes I had to learn to speak powerfully, and I really strive to empower women every time I perform poetry,” she said.

In addition to being a performer, Renée is also a Reiki master, which is a form of alternative medicine that originated in Japan.

Renée said that because of her practice as a Reiki master, she could sense that the tragedy that was happening in Paris while she was asleep before the news broke, and when she woke up, she wrote the song for her performance to pay tribute to those affected by the tragedy.

During her performance, Renée was accompanied by two other performers for a short amount of time. CSU-Pueblo English professor Kelly Gehlhoff and student Rick Quintana were on stage to perform a Native American song with Renée. Gehlhoff sang alongside with Renée as Quintana played the flute.

The three had never performed together before Tuesday, and only decided to do so after they met recently.