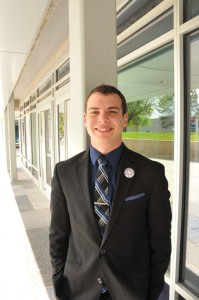 Colorado State University-Pueblo student Gene Wilson was elected as vice president of the Associated Students’ Government in April 2015 and is looking forward to his future. Wilson, a political science and Spanish major with a minor in communication and rhetoric, has set his sights on attending law school after he graduates from CSU-Pueblo in May 2016.

Wilson lives with his family in Fountain and is the second youngest of four siblings.  His father, a retired United States Army veteran, manages a lumber mill in Fountain and his mother runs a day care and cleaning business from their home.

Wilson and current ASG president, Sarah Zarr, combined efforts and ran as a team in the organization’s 2015 presidential campaign, representing the school’s Legendary Party. Wilson stated that although he and Zarr are complete opposites, they work well together as a team.

He is also involved in a number of other student organizations, including the University Budget Board, Student Technology Fee Committee, the Alumni Board, Student Fee Governing Board and Enactus. He also previously served as vice president of CSU-Pueblo’s award winning forensics team.

Wilson offered some advice to students who are interested in ASG.

“You have to have a passion for the school. No matter how busy you get, keep the passion to make changes around campus,” he said.

His hope is to inspire ASG student senators to continue what he and Zarr started.  He subscribes to the motto, “no risk, no reward.”

Wilson, who writes constitutional policies as part of his ASG duties, developed an interest in law after observing proceedings in the Colorado State Appellate Court while attending Fountain-Fort Carson High School. His professional role model is Chris Turner, a well-known Pueblo attorney and CSU-Pueblo alumni.

Wilson aspires to practice as a criminal defense attorney once he finishes law school and hopes to work his way up the legal ranks to become a judge.

Wilson remains optimistic about the future of CSU-Pueblo, despite decreasing enrollment numbers due to the lack of higher education funding.  One of his goals is to create a school environment that will draw new students to the school.

“I want students to come to CSU-Pueblo and feel a sense of pride at attending our school,” Wilson said.

During his limited free time, Wilson makes time to volunteer in his local community. He spends much of his time travelling with the forensics team. In 2012, he volunteered in the Obama/Romney presidential race. For fun, he hikes the Manitou Springs Incline and reads books by his favorite author, Stephen King.

Editor’s note: This story is part of a series of profiles about members of the Associated Students’ Government at CSU-Pueblo.