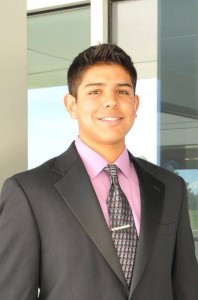 Huerta was elected as senator for the Associated Students’ Government at Colorado State University Pueblo in April.

Huerta, who spends the majority of his time coordinating events, volunteering and attending ASG committee meetings, is completing a Master’s in Business Administration at the Hasan School of Business, while serving as academic senator of the HSB.

He plans to graduate at the end of the fall 2016 semester.

Huerta, a Colorado native, was born in Pueblo and grew up in the small southeastern town of Granada. He obtained an associate’s degree at Lamar Community College at the same time he graduated from high school.

Huerta said his experience in ASG has been “eventful.”

“There is a lot more to ASG than just going to meetings and voting,” he said. His responsibilities include serving on the Student Fee Governing Board, the Student Athletic Fee committee, Dining Services Advisory committee, Dean’s Advisory Council, and Student Recreation Operations committee.

Aside from his ASG workload and being a full-time student, Huerta also manages to be involved in various other organizations both on and off campus.

He helps to organize the annual Entrepreneurship Competition, which is sponsored by the Healy Center in the Hasan School of Business. The goal of the competition is to spur economic growth in Southern Colorado.

Huerta is also a member the Enactus Club, an organization that is currently focusing its efforts on a sustainability project, the College Assistance Migrant Program and the President’s Leadership Program.

Huerta and his fellow classmates have recently taken on a project in the Pueblo community, as part of their PLP responsibilities, that involves the remodeling of part of the El Centro Del Quinto Sol recreation center on the east side of Pueblo. He is very passionate about volunteering in the local community and relishes the positive influence he can make on the lives of less fortunate youths.

Huerta hopes to secure an internship in the summer, but his back up plan is to learn the ropes in his grandmother’s title insurance business in Lamar. He has set his sights on creating much needed economic growth in the region. Eventually, he plans to put his knowledge and skills to use on a corporate level.

His role model is Apple founder Steve Jobs because of the mogul’s tenacity and success despite facing many personal and professional challenges during his career.

Huerta, whose many obligations includes working as a graduate assistant to the graduate program director, Kristyn White Davis, is a go-getter who considers leadership to be one of his strongest suits.

Huerta hopes to leave a legacy at CSU-Pueblo by making a positive impact.

One of his concerns is the ever-shrinking enrollment numbers at the university.

“I want to do something that will bring students here,” Huerta said. He thinks CSU-Pueblo lacks the college vibe that most university-oriented towns exude because of its location.  Furthermore, he believes that people come to Colorado expecting to see mountains and to be able to experience the year-round activities the state has to offer.

Huerta has a knack for leadership. He believes that the key to being a good leader lies in the ability to facilitate change by leading and helping others.

Huerta continually aspires to make a positive impact at CSU-Pueblo, and said he needs to focus on being more compassionate when the situation calls for it.

During his limited free time Huerta does CrossFit at a downtown gym. He also to be a referee for all the intramural team sports at CSU-Pueblo, but the games conflict with his current school schedule. He said he is partial to football, and said he’s a New England Patriots fan.

Editor’s note: This story is part of a series of profiles about members of the Associated Students’ Government at CSU-Pueblo.