A long but unfinished journey 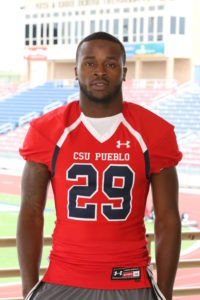 Josh Smith, junior at Colorado State University-Pueblo, has had a long journey that has lead him to be part of the Pack football family.

Smith, 21, whose birthday is December 18, 1995, enjoys fitness as well as outdoor activities.

Smith, who is majoring in exercise science with an emphasis in strength and conditioning, is originally from Chicago but moved to Florida at a young age. “I lived in Florida for like 10 years before moving to Washington State to finish high school,” Smith said.

Smith has had a bumpy road as well, dealing with family and a previous university, Golden West College. The junior wide receiver said the difficulty of finding a true home has led him here to Pueblo where he feels the culture is just right.

“The culture here is something that’s truly amazing,” Smith said. “It makes it fun to play for and be a part of a program like CSU-Pueblo.”

Smith said the team doesn’t really expect anything this season. “I can’t say we expect anything because nothing is ever given.” he said. “I can say that we’re prepared physically and mentally to go out there and lay it all-out every time we suit up.”